Let's have two populations or random variables (RV) \(X\) and \(Y\). We want to evaluate if the means of these populations are significantly different. In other words, we want to perform an hypothesis test to determine if there is a significant difference between their means which are \(\mu_X\) and \(\mu_Y\) respectively. In most of the cases, there is not have access to all the realizations of the RVs, as such the hypothesis test is performed with statistical samples (data) that are obtained by sampling the RVs, this is to say, by performing an experiment. Two hypothesis are considered: one null hypothesis \(H_0\) (there is no difference between means), and one alternative hypothesis \(H_1\) (there is difference between means), these are formulated as:

It is concluded that there is a significant difference in the population means, \(H_0\) is rejected, if there probability of having a difference between means at least or larger than the observed from the data is smaller than the significance level or \(\alpha\). Otherwise, \(H_0\) is NOT rejected based on the available data. A commonly used value for \(\alpha\) is 0.05 (this is to say 5%).

To demonstrate the effects of multiple comparisons, the same the same hypothesis test will be tested in two scenarios:

All this is to say, just by chance there is a probability of 5% or less that the absolute difference between \(\mu_X\) and \(\mu_Y\) is larger than \(1.96\sigma_Z\). To verify this in the simulation, 10,000 samplings were done to \(X\) and \(Y\), each sample consisting in 100 sample points. The graph below presents the theoretical probability density function (pdf) for \(Z\), and the empiric pdf obtained from the simulation. 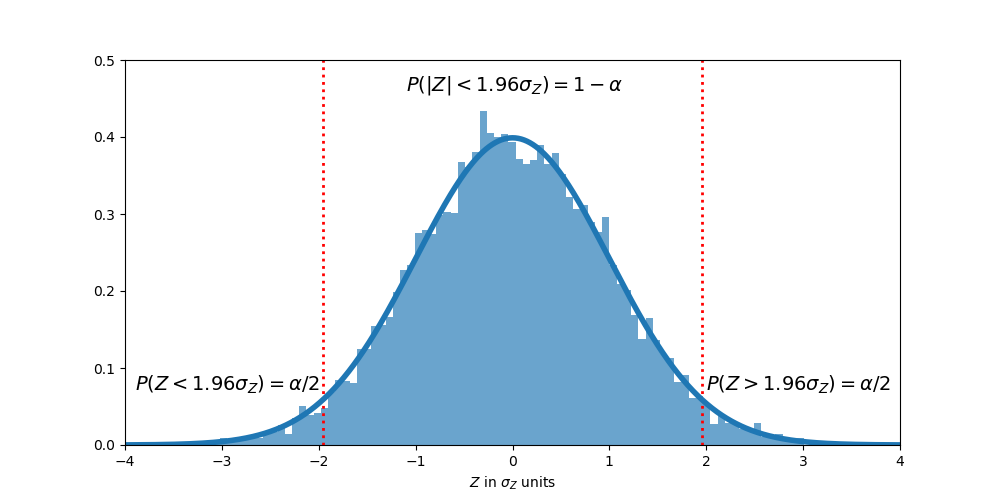 So far so good, the null hypothesis is rejected around 5% of the time. But the problems start with multiple comparisons.

Again, let's assume the null hypothesis is true. Thus, in this scenario, each population (\(X\) and \(Y\)) is characterized by a set of two independent RVs, which have a standard normal distribution. As the variables are independent and normally distributed, the covariance matrix for \(X\) and \(Y\) is a diagonal full with the variance of variable, in this case 1. This is to say:

The possibility of rejecting the null hypothesis, or finding a significant results just by chance, gets larger the more comparisons are performed simultaneously.

Probability of finding at least one significant result. Uncorrected and Bonferroni-corrected for multiple comparisons.

Getting back to the bivariate RV, the regions obtained by using the significance level \(\alpha\) or \(\alpha/m\) are shown below. The standard score (or z-score) for the corrected significance level \(\alpha/m\) is 2.24. Moreover, the theoretical results are compared with the one from the simulation, where 10,000 samplings were done to \(X\) and \(Y\), each sample consisting in 100 sample points. 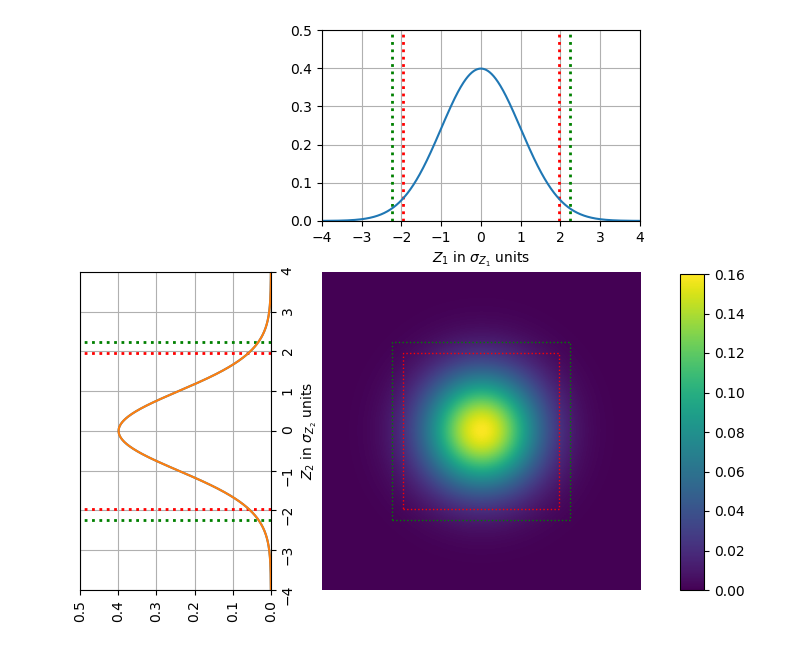 I hope this post helps to understand better why it's important to take action when multiple comparisons are performed.